I had a feeling that before I even picked up this book that I wouldn’t like it, but I have heard a lot of commotion over it and thought I would see what all of the hype was about, albeit a bit late on the bandwagon. But not late enough, however, to pick this up for around $8 for the Kindle… it appears as though Amazon is likely capitalizing on the fact that this is now a major motion picture drawing more interest in the book itself.

If you read my review of The Choice Effect, you’ll also know that this book was mentioned in high acclaim by those authors, although it wasn’t their recommendation that piqued my curiosity. She had a few quotes in their book which I found grounded and intelligent. I decided I would listen to what Elizabeth Gilbert had to say about life, love and the pursuit of happiness. That’s not to say that I expected to agree with her about anything. And sure enough, I didn’t.

It’s true that she comes off rather selfish and whiny throughout the book. Whether you find empathy with her for this or not, you can at least say that she was honest and let even her not-so-good qualities come through. If anything, I felt that her search for “god” convicting in my own life — here is a woman who devoted a good bit of time searching for God. I believe she was searching in the wrong place, but not without a great effort on her part. What if I took the time she spent seeking God myself? The bible says to be still and know that He is God, how often do I do that? So in that sense, I connected with her journey and renewed my faith. I cannot, however, identify with what or who she claims is “god.” Nor do I find her ideas about Christianity, Jesus and the Bible to be at all accurate. As far as Catholicism goes, well, that’s another story. History does not particularly shed the Catholic church in a good light. I make no apologies for saying so.

I do believe that Elizabeth was sincere throughout the book. However, the book did not resonate with me as it has done for many others. I found it lacked a certain amount of depth. I actually had a hard time finishing it, almost didn’t. I put it down for a couple weeks during the Italy segment, and didn’t have much of a desire to pick it up again. It wasn’t riveting, it didn’t capture my imagination or “take me to another place.” All in all, it was rather disappointing and I was not very impressed. She describes herself as someone who just “wants more” or someone who “doesn’t have a quiet mind.” I guess I just don’t relate. Does not compute.

I can appreciate that we come from different walks of life and belief systems, and it was interesting to see inside someones mind for a brief time, but if anything just to remind myself that I am content just where I am, even though my life may not be fulfilling to her, it is for me, and that’s what counts.

My first honest-to-goodness purchase for the Kindle was a KJV bible from OSNOVA because of the direct jump navigational functionality. For $4.99 you can’t beat it!

Depending on your individual preferences, you can purchase a version where each verse is on a separate line, or paragraphed (which is what I chose), or without any navigation or chapter/verse numbers for those who desire to use the Text-to-Speech feature.
… END_OF_DOCUMENT_TOKEN_TO_BE_REPLACED

Apparently I was the lucky one that got this book for free, as it now comes with a $9.99 price tag, and thus I can no longer tag it as a free book. However, this is a great reminder to you all that you should check Amazon regularly for free books and download the heck of them… you can always delete them later if you decide they are really not your cup of tea.
… END_OF_DOCUMENT_TOKEN_TO_BE_REPLACED 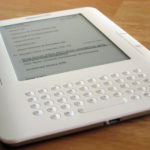 You just didn’t know it would take me this long to blog about it. As I mentioned in the Kindle 2 Price Cut post, I was now much closer to lounging with my Kindle in total bliss, and sure enough shortly after I took the plunge. I ordered it last Friday, and it arrived on Thursday. Which means I have had the Kindle for all of 4 days. I have already read 2 books, and contemplating the next. The device has also been updated to the latest firmware which includes organizing books into collections. My goal for the 4th of July Official Work HolidayTM  is to 1) not forget to exercise or eat and 2) Get all of my digital books properly categorized and organized.

I admit, when I discovered that TODAY Amazon lowered the price of the Kindle2

to $189, I squealed with delight. I have been saving up for one slowly over the past couple months, partly supplied through SwagBucks. In fact, I just got enough SwagBucks to get another $5 gift card. Anyway, since getting a Kindle is not exactly a priority in my home, the lower price means that I will be getting it sooner, as I only need to save up another $100, well, now $95…. END_OF_DOCUMENT_TOKEN_TO_BE_REPLACED

I have been pretty interested in obtaining a Kindle for the past few months, nay, since the Kindle 2 came out last year. Alas, I still do not own one but am currently borrowing one from a friend, and saving up my money in the interim (and doing a bunch of sweepstakes and contests). Finding free books has become a little hobby of mine now, so by the time I do have a Kindle there is no shortage of things to read. I will probably download more books that I will actually read, because that’s just the way I am unfortunately.
… END_OF_DOCUMENT_TOKEN_TO_BE_REPLACED